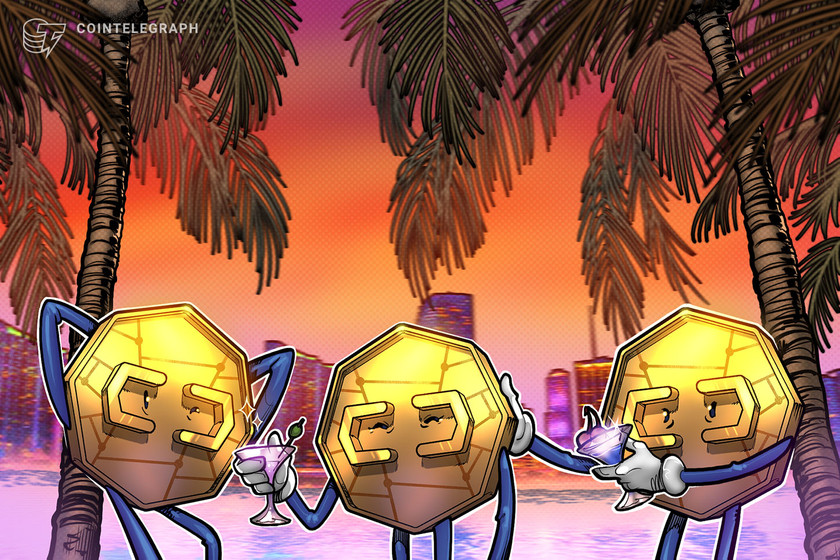 As Miami comes down from the “high” of having hosted the “largest-ever” Bitcoin event, it seems reasonable to ask: Does the Sunshine State’s entrepot really have what it takes to become “the world’s cryptocurrency capital?” — a new role foreseen by its dynamic mayor. If not, could Miami at least become the next Crypto Valley — i.e., a cradle for cryptocurrency and blockchain innovation like the Swiss canton of Zug?

The optics certainly look good. As the New York Times noted in its coverage of last week’s Bitcoin 2021 gathering, “The city has gone full crypto,” with Bitcoin ATMs sprinkling Miami’s Wynwood neighborhood. Meanwhile, crypto exchange FTX has secured the naming rights for the Miami Heats arena, while there was also a proposal by Miami mayor Francis Suarez to allow citizens to pay taxes with cryptocurrency, among other things.

But others caution that a lot of hard work still awaits — and regulatory/legislative events have to take a favorable turn before Miami can lay claim to being the capital of anything in the rapidly evolving cryptoverse.

“Miami cannot do this without the Florida state legislature passing pro-crypto legislation,” Zachary Kelman, managing partner at Kelman Law, told Cointelegraph, which followed with a question about Bitcoin 2021 being a milestone event and harbinger of big things to come. Kelman answered, “Yes, but in large part due to the pent-up demand for such a conference given the crypto bull market occurring during the pandemic.”

Kelman is no crypto skeptic — quite the opposite. He belongs to the Florida Blockchain Business Association, which is actively lobbying for the necessary crypto-enabling state legislation. If that is secured, Miami could become a crypto hub, even without federal legislation, he said, because:

“Money transmission rules, which are mostly governed by state legislatures, hold the keys for crypto businesses to thrive in a particular jurisdiction. Most of the activity remains in the exchange space, followed by the growth of ‘DeFi’ projects, which also often fall under the state money transmission rules.”

Miami has other advantages over other emerging crypto hubs — even Wyoming, which already has crypto-supportive state laws — Hemang Subramanian, assistant professor at Florida International University’s business school, told Cointelegraph. Miami is an international city with a developed banking infrastructure, and many venture capitalists and high-net-worth individuals are interested in funding innovation. Moreover, “it is one the largest financial hubs in the country, with a large port and a huge expat population from South America, the Caribbean and Europe.”

Benjamin Sauter, a lawyer at Kobre & Kim LLP, agreed with Subramanian that Miami was an appealing destination and business hub “particularly as digital currencies begin to take the Latin American market by storm.” Florida also lacks a state income tax — another plus, he told Cointelegraph. But those advantages still may be unable to transform the city into a global crypto hub, even with favorable state legislation:

“Most of the serious legal work needs to happen at the federal level. Much of the current discussion focuses on Anti-Money Laundering, international cooperation and asset recovery, and tax enforcement. Wealthy individuals and companies in the [crypto] space would do well to plan for government scrutiny and enforcement measures in these areas, rather than holding their breaths for a quick fix in Miami.”

Lane Kasselman, chief business officer of Blockchain.com, which recently announced that it was moving its U.S. headquarters from New York to Miami, was understandably bullish about the company’s sunny new second home and told Cointelegraph, “Miami is already the [new] Crypto Valley, and the announcements last week prove it.” Mayor Suarez is acting as a vocal proponent for technology investment in the region, he added, and “Miami’s welcoming regulatory environment will help fuel crypto innovation.”

Miami as seen from abroad

What about the view from further afield? Thomas Nägele, an attorney who played a role in the evolution of Crypto Valley, told Cointelegraph, “I think that Miami is in a very good position to become a blockchain hub like the Crypto Valley in Switzerland and the crypto country Liechtenstein,” while adding several caveats:

“A blockchain hub is not something that can simply be imposed; it has to be supported by the community, requires a certain number of companies that are active in this area, and, last but not least, needs legal clarity.”

This last item, “legal clarity,” is of the utmost importance, Nägele stressed, and “the perfect example for that is Liechtenstein with its TVTG — also known as Blockchain Act — which provides the legal framework for the tokenization of assets.”

Ian Simpson, senior marketing and communication manager at Bitcoin Suisse AG — a company based in the Crypto Valley — told Cointelegraph, “One challenge for larger cities and countries is that crypto can be ‘swallowed up’ by the wider tech ecosystem, and this can dilute the attractiveness to blockchain projects.” He added, “Close contact and access to ideas, talent and quality services are some of the things that have made Switzerland’s Crypto Valley what it is. We’ll have to wait and see how things develop in Miami.”

When asked if Bitcoin 2021 should be viewed as a milestone event for the crypto and blockchain space, Simpson answered that while it was a welcoming event, particularly after all the lockdowns of the past year, “It does not seem to have marked any significant change or development in the community — and as we saw it had absolutely no effect on the markets.”

Nägele, for his part, called it “a pity” that most European countries were on a quarantine list and were unable to join the Bitcoin 2021 gathering, “but what my friends were telling me, it was an amazing event, and this is always a good start for an ecosystem.” While Kasselman commented, “There’s no question we’ve reached a critical inflection point where crypto has moved from niche to mainstream,” he further explained to Cointelegraph:

“What’s notable is that the conference wasn’t just about Bitcoin, it was about the ecosystem: From DeFi to NFT to SushiSwap. Crypto is an industry, not just a [single] highly valued token.”

A new center of gravity?

Overall, is it even possible to identify the crypto/blockchain world’s nerve center, and if so, could it change? It may shift from time to time, said Nägele, “depending on where attractive conditions exist for the relevant companies. Europe and especially Switzerland and Liechtenstein were certainly early adopters, and recently, Asia is catching up. I really look forward to welcoming Miami to the club, but finally, I hope that we consider the world as the crypto hub.”

Simpson added, “The U.S. has a strong position in the blockchain and crypto space by virtue of its lead in technology and with the recent IPO of Coinbase. However, Europe and Switzerland seem to offer more openness on the regulatory side, and the Asian ecosystem also has a great deal of weight by virtue of scale.” But it is still difficult to point to a single center of gravity in the blockchain ecosystem, he added.

Related: The female speakers who made an impact at Bitcoin2021 in Miami

“While the U.S. and Europe get much of the press, Latin America and Asia show the fastest retail user growth,” added Kasselman. “It’s likely as crypto becomes more ubiquitous across financial services, we’ll see emerging markets accelerate adoption for the core products, and mature markets grow their usage of the expanding crypto ecosystem.”

“I think Miami could easily be the American capital of crypto if it isn’t already,” noted Kelman. “However, without federal legislative support, it is impossible for Miami to become the international crypto capital,” and recent signs “point to more onerous federal legislation rather than crypto-friendly laws in the near term.”

Subramanian said that regulation always follows innovation, and “in a democracy, the people’s ‘will’ will eventually play out.” That is, the requisite state and federal legislation will come eventually. “If Zug in Switzerland can become a crypto-blockchain haven, Miami can too. It is more diverse, more international, and much more capital-friendly,” he added.